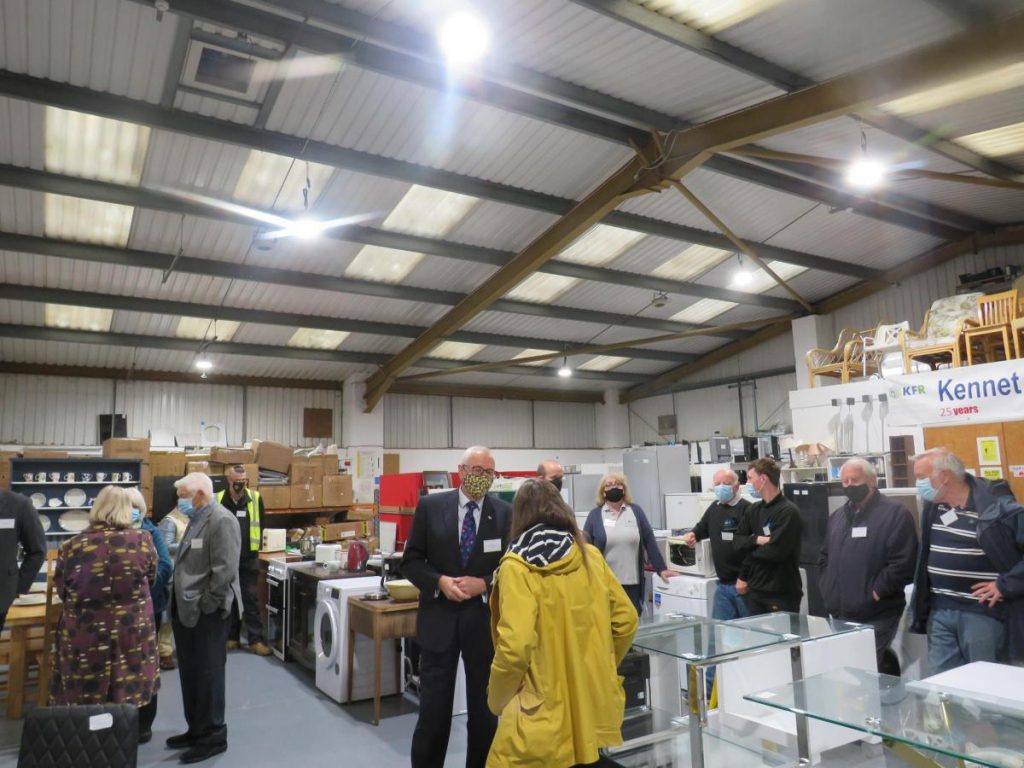 A Devizes-based charity has been praised for its life-changing work during the pandemic.

KFR began life as the Kennet Furniture Project, back in 1995. A small team aimed to help disadvantaged families by collecting unwanted furniture and selling it at a low cost, at the same time as training volunteers and improving the environment.

In the 25 years since – that ethos has remained the same.

But the charity has gone from strength to strength, recruiting more staff, teaming up with partners across the county and, this week, officially expanding.

KFR, based at the Hopton Industrial Estate, has now doubled in size.

A socially-distanced event, with Devizes MP Danny Kruger, was held on Friday to mark the monumental moment, and to look back at 25 years of success and memories.

Dan Thompson, operations manager, thanked trustees, volunteers and friends of the charity who had helped “steer them” through difficult periods.

They included Wiltshire Council, Building Bridges and the Community Foundation and Furniture Box.

“These have all been a stepping stone or a building block to help us get here,” said Dan.

“This year marks 25 years of KFR and what better way to celebrate than doubling in size, in doubling the amount of furniture and white goods we can give out to the public.

“To all the staff and volunteers who worked so hard during the pandemic, thank you. For a while we didn’t know what would happen. We’ve worked so hard as a team for this place and it’s lead us to here.”

He said: “There was real social need before the pandemic, the fact this organisation was set up 25 years ago reflects that. Unfortunately that need doesn’t go away, and when something like the last year hits, then the community has to dig deep in itself.”

He added: “The whole area and Devizes town in particular seems to have such a wealth of organisations in it who look out for each other, and the pandemic brought them together.”

Also attending the 25th anniversary was Doug Western MBE,  one of the original architects of KFR. Looking back at the years of hard work, he said that quality of service, professionalism and positivity was what made KFR so special.

He added: “It’s a fun place to be, and Dan makes it a real pleasure for the people that work here – he’s brilliant.

“To see how far KFR has come is quite something.”

What has KFR done in the last 25 years?

Since starting in a garage, and expanding into more and more space – the charity has helped hundreds of disadvantaged families and sold thousands of items of furniture.

The group collects and refurbishes more than 150 tonnes of unwanted furniture from all over the county each year and then sells it at low cost.

In the last year it has also given more than 150 pieces of furniture to victims of domestic abuse, people in extreme poverty and rough sleepers who have been given a home.

Revenue fell 30 per cent – more than £8,000 – during the third lockdown when its showroom could only see a reduced number of customers by appointment only.

A grant from the Wiltshire Community Foundation helped cover losses.

Last summer, KFR  able to supply £350 of white goods from their Crisis Provision Project to an army veteran who spent years sleeping rough in woods in Devizes.

Richard, and his friend Emma, were able to start a new life thank to KFR alongside other charities, and Wiltshire Council.

The year before, KFR was named a reuse charity of the year in the Reuse Network Awards held at a conference in Warwickshire.

KFR itself was formed in April 2013, following a merger between the Kennet Furniture Project and Refurbiz.

The Kennet Furniture Project had began in 1995 with the aim of helping disadvantaged families by collecting unwanted furniture and selling it at a low cost, at the same time as training volunteers and improving the environment.

Refurbiz had started in 2003 with similar aims but focussing on white goods such as cookers and washing machines.

Over the years their work overlapped more and more.

KFR, as it is known now, moved into the Hopton Industrial Estate in April 2013 and went on the make differences to people’s lives across Wiltshire and Swindon.

For updates, or more information, go to https://www.facebook.com/KFRWiltshire/